The factory built TR7 Sprints were standard Coupes fitted with the Dolomite Sprint 16 valve engine. They were built during 1977. The first ones had the earlier shell with the large fuel filler cap. My own cars are all part of the second batch and have the smaller fuel cap. Most of the cars were registered in either Birmingham or Coventry with S registration numbers. However there are at least 2 possibly 3 registered on T plates. This  picture shows the 16v cylinder head as fitted to the Triumph Dolomite Sprint and  the very rare Triumph TR7 Sprint. The bottom half of the engine is the same as in the 8v TR7 so it is not hard to convert a normal TR7 to sprint power. As can be seen each cylinder has 4 valves, which were operated be one camshaft and a series of rockers, rather than the usual double overhead camshaft used by Ford in their BDA. The engine numbers of the genuine TR7 sprints begin with CH and end in HE .The H means it is a high compression unit and the E means it is an engine as opposed to a gearbox etc.When fitted to the Dolomite the sprint engine has a VA suffix, so it is easy to spot a genuine TR7 sprint engine, my own TR7  sprint, SJW 530S, has the engine no 117,this is the original engine fitted at the factory so it is strange it does not have the usual  CH----HE number. Mechanically the only difference between the TR7 and the TR7 sprint is in the 16v engine, 5 speed gearbox and the later heavy duty rear axle. The cars were based on the 1978 model year bodyshell which had the door mounted interior lights and smaller filler cap . 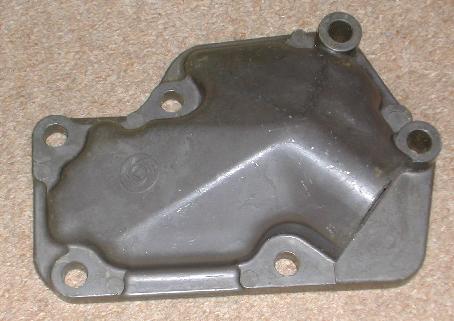 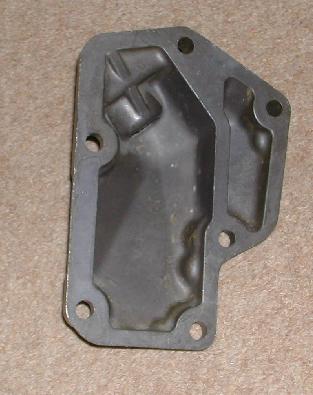 Above is the special TR7 Sprint water transfer housing as fitted to the rear of the cylinder head.

Special Cast Exhaust Manifold as fitted to the TR7 Sprint The exhaust manifold on the TR7 sprint is unique to the car its part number is RKC2788 and is unlike both the standard TR7 or Dolomite sprint ones. There were very few of these manifolds manufactured so they are hard to come by, Anyone who has converted a TR7 to sprint power using either a  Dolomite sprint or tubular extractor manbfold will know how difficult they are to fit,  requiring bodywork modifications in the bulkhead area or reshaping the tubular manifold to clear the chassis. The original item fits properly and also  helps the engine develop more power as the Dolomite sprint  manifold is very restrictive. The Dolomite sprint originally developed 135 bhp and were called Dolomite 135, the factory however could not guarantee this power output  in all the engines so they were known as sprints and the power output claimed reduced to 127 bhp. Many of the cars leaving the factory had the 135 bhp engines, especially the TR7 sprint versions  because of the less restricted exhaust manifold. The photographs show the manifold from  different angles so you can compare it with the other ones and there is a clear view of the part number. The cooling system overflow bottle fitted to the TR7 sprint is TKC 1887 as fitted to the early 8 valve TR7 .It is situated on the offside inner wing and is held in place by a bracket (YKC267) which clamps around the bottle, the bracket is fastened to the car by 3 rivets. There is an inlet to the bottle from the radiator and an overflow pipe near the pressure cap. This photograph shows the chassis plate of a genuine TR7 sprint, the ACH chassis number can clearly be seen as well as the paint code, CAD which means the car was(and still is) painted flamenco, an orangey shade of red. The chassis plates on the TR7 sprints were always fixed to the edge of  the nearside door, just below the lock. The car in the picture is one of the very few built using an early shell, these have the larger fuel filler cap and roof mounted interior light as opposed to the door mounted ones of the later cars. This is an unrestored car which has had a respray at some point, it is in remarkably good condition with all the unique sprint bits intact, in fact it is the first time I have known a tidy roadworthy car change hands, they are usually restoration projects(needing varying amounts of work), even my own SJW 530S has needed  a full rebuild and my other one, SJW 545S is in really bad condition.

Here we have a selection of handbooks for the 1977 model year Triumph TR7s, on the left the green book is for the standard UK spec TR7, in the centre is the pink one for the TR7 sprint, there were very few of these cars built but the factory had already had the handbooks printed which shows they intended to put the car into full production. The red book on the right is for the spec TR7 , this includes a wiring diagram for the North American cars fitted with air conditioning. All these books are from my own collection and in excellent condition. This is a picture of the Triumph TR7 sprint air filter housing which bolts onto the carbs this is the back part only and behind it is the same item from a standard TR7 for comparison. As can be seen the carbs are half an inch further apart on the sprint inlet manifold so the holes on the air box are the same. The air filter housing cover itself is the same as on the early standard TR7 and has 2 convoluted plastic pipes on the end which go to 2 holes in the black card at the side of the radiator, these direct cool air into the air filter. The decals above were designed by John Gibson of the TR Drivers clubs Scottish group. John totally rebuilt SJW 539S the Tahiti blue TR7 Sprint which is featured on this page. The transfers have been made to fit the bonnet and bootlid of the sprint. Most cars were originally fitted with side stripes including the word sprint near the rear of the car. Our Carmine red Sprint SJW 530S will have a complete set of original decals fitted when its restoration is complete. Thank you to TR Drivers club member James Duckworth for providing photos of his Sprint WAC 274S which has a complete set of original decals. The TR7 sprints were fitted with either the standard steel wheels with full plastic covers or the pewter coloured GKN made Keepax designed alloys which later came as standard equipment on the TR7 Coupe. The ones fitted to the sprint have the number 76 or 77 stamped on them. This means they were manufactured in 1976 or 1977 as part of a small batch for fitment to the sprint and the early TR8 coupes. Some sprints had alloys fitted after they left the factory, these could have any date of manufacture on them, the Heritage certificate for these cars would omit alloys from the options list. When fitted with steel wheels and plastic trims, the wheel nuts are chrome plated. The nuts fitted to cars with alloy wheels are plated mild steel. The TR7 Sprints had 185/70/13 to both types of wheel.

We have For Sale stainless steel reproductions of the factory wheel nuts, as fitted to cars with alloy wheels.

They are excellent quality and are £120 per set plus P+P.

This is the only factory produced repair operations manual which contains information on the factory built TR7 sprint, it was printed in 1978 and its part number is AKM3079A.

There is a slip inserted inside the cover which states:-

At the time of going to press the 4 valve(sprint) engine referred to in this manual has not been fitted to the Triumph TR7.