Registered  on the day the TR7 was released on the UK market this car is probably the oldest UK spec car still on the road. The UK spec cars (as opposed to pre production prototypes) were numbered from ACG 36 onwards. This was therefore the 62nd production car to be built for the UK and it was bought by BL dealer Mann Egerton for use as a demonstrator. It is finished in Pimento red with black cord interior.

It has all the items unique to the early cars;-

5 Map light fitted to the rear bulkhead panel between the seats.

6 Interior light fitted in the headlining near the rear windscreen.

7 Carburettor air intake with two pipes feeding cool air from the front of the car.

11 Steel BL badge on the lower half of the front wing, unique to cars built before January 1977.

5 Maplight fitted to the rear bulkhead cover between the seats.

6 Interior light fitted in the centre of the headlining near the rea window.

7 Carburettor air intake with two pipes feeding air from the front of the car.

11 No BL badges fitted to the front wings.

1 Now fitted wth the smaller filler cap, changed to allow the hood to be fitted on the forthcoming convertible.

5 Carburettor air intake with twoo pipes feeding air from the front of the car.

6 Later type fuel filler cover in the boot, there is also now a Hardura cover on the rear bulkhead.

Here are our two TR7 FHCs, on the left is XFP 530Y, a very late Solihull built car, its finished in Bordeaux red metallic with the tan check interior. Its chassis num,ber is  06869 which means it is approximately 150 from the last FHC built. Now back on the road after 2 years in storage.

On the right is OEV 7P, this is a very early Speke built car its chassis number is ACG 97, it was registered on the day the car was announced in the UK, 17/03/76. It is finished in Pimento red with black broadcord interior. 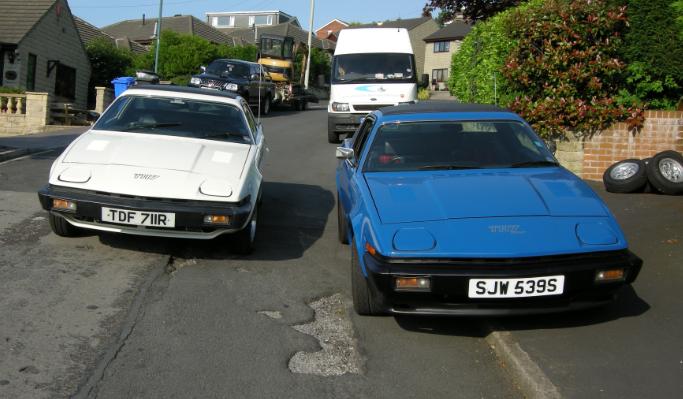