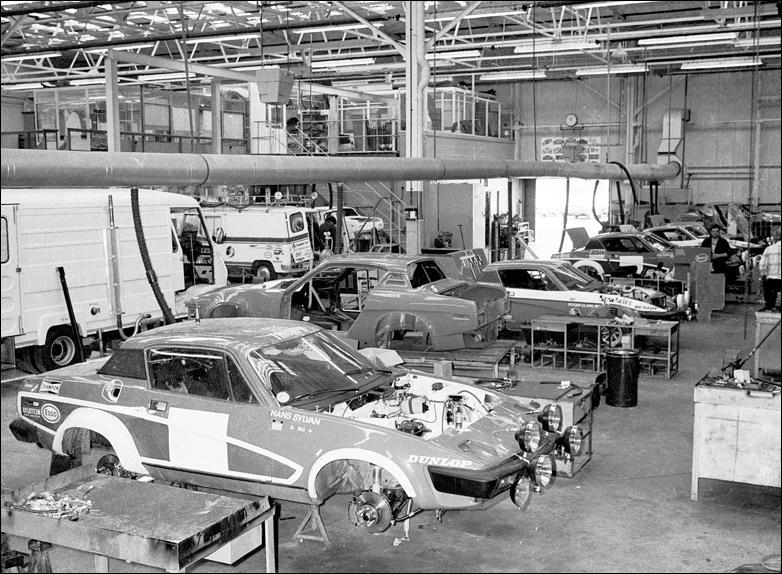 The factory at Abingdon where all the works TR7s were prepared, it is possible to see both Sparkrite sponsored cars, SJW 546S and XJO 414V as used by Rger Clark in 1980. Although the cars were sponsored by Sparkrite and Esso, they were still works cars with full factory support.

In the foreground is the Per Eklund car  and a new shell waiting to be built up.

There were 20 different registration numbers used on the works rally cars, the rally programme started in 1976 with two 16v sprint engined cars. KDU 497N and KDU 498N were the first two TR7 rally cars. The first event  they appeared in was the Welsh rally of 1976. Both cars retired, a disappointing result after all the hard work the team had put into the project. The second event also ended with the retirement of both cars on the Scottish rally.

1. KDU 497N, this was usually driven in 1976 by Brian Culceth and Johnstone Syer. the first finish for this car was in the 1976 Burmah rally when Brian Culceth and Johnstone Syer finished fifteenth overall. Afew weeks later the same crew finished in fifth place on the Manx Trophy rally, the firrst time both cars finished an event In November of 1976 497N came eleventh overall in the Tour de Corse before being replaced by OOE 937R. When OOE 937R was damaged Culceth reverted to 497N. A new car was built with the KDU 497N registration, it had a Safety Devices shell, now with built in roll cage and the V8 engine, it was used for development and rallied by Dereck Boyd in 1978.

2. KDU 498N, used in 1976 by Tony Pond and Dave Richards. Finished third in the 1976 Manx Trophy rally driven by Tony Pond and Dave Richards. The first TR7 to win a rally outright in the Raylor rally(October 1976), it was also the first to win an international event when it won  the 1977 Boucles de Spa. Shortly afterwards it was sold, apparantly it had had a very hard life.

4. OOE 938R Became the regular car for Tony Pond and Fred Gallagher in the first half of 1977

5. OOM 512R Used as a 16 valve car at the end of 1977 by Brian Culceth and Johnstone Syer, finished second in the Manx rally in September. Converted to V8 spec and repainted in the new red based colours it was used during the first part of 1978,

6. OOM 513R Used by Tony Pond and Fred Gallagher during the second half of 1977.Was consided to be an unlucky car because of its inability to finish a rally and its number 13 registration number. This is  possibly the only remaining sprint engined car still using a four cylinder engine.Used by Pat Ryan with Mike Nicholson in his only works TR7 appearance on the 1977 RAC rally.

7. OOM 514R Used in 16 valve spec by Tony Pond and Fred Gallagher to finish eighth in the 1977 Lombard RAC rally. There was a new car using this number built with a new Safety Devices shell and V8 power for the 1979 season.

Four cars used shells which had originally been built up as TR7 Sprint road cars, when John Davenport asked for new shells, he was told to choose four from the cars in the compound. The reason the numbers arent consecutive is because he needed white cars without sunrooves and these were the nearest four . They carry the ACH chassis numbers used on the TR7 Sprints. Most of the road and rally sprint based cars had registration numbers beginning in SJW 5  and ending in S.

8. SJW 533S Built for the 1978 season as a 16v car, the first car to carry the red/white/blue livery associated with the forthcoming V8 powered car. It was entered in the Circuit of Ireland, its only rally in 16v form before being converted to V8 for the Welsh rally in May. Later sold to the Chequered Flag garage  and rallied in their black /white colours.

9. SJW 540S This is the car on display at Gaydon, This was a very successful car in the hands of Tony Pond and Fred Galagher. Winner of both the 24 hours of Ypres, its first event, and the Manx trophy rally in 1978, also finished fourth overall in that years Lombard RAC rally. Driven less successfully  in the first half of 1979 by Graham Elsmore.

10. SJW 546S Originally built as a RHD car for Graham Elsmore to use in  the 1979 season, its best results were third place on the Manx rally and 16th overall on the Lombard RAC.The second part of this cars life was as the first Sparkrite liveried works car used by Roger Clark and Jim Porter in the early part of 1980.

11.  SJW 548S.The first car to be built in a LHD shell to be used by Simo Lampinen, Per Eklund and Jean Luc Therier. Always a LHD car when used by the works team but became a very successful private entry in the hands of Ken Wood, in RHD form.Ken Wood used this car to win the Scottish rally championship.

12. UYH 863S . First used by Graham Elsmore, it was damaged on the Galway rally in February 1979, a new car was built for use on that years RAC , driven by Terry Kaby, he retired with engine problems.One of the most successfull TR7 rally cars winning the 1980 Rothmans Manx stages and finishing second overall on the Tour of Cumbria. driven on both occasions by Tony Pond and Fred Gallagher.

13. SCE 645S This was the only works TR7 not built at Abingdon, It was assembled at the Safety Devices factory at Newmarket. It was only used once by the works team at the 1977 RAC rally and it had a 16v sprint engine. Markku Saaristo and Ian Grindrod brought the car home in37th place overall.

14. TUD 682T  The second LHD car built in 1979, used by Per Eklund during 1979 and loaned to American rally champion John Buffum for that years RAC rally. Used as a test bed for the Pierburg fuel injection system, it was unsuccessful so the works cars were fitted with quad Weber 48 DCOEs  for the 1980 season.

15.  TUD 683T This number was used on two different cars. The first was a LHD version used in 1979 by Simo Lampinen, its best result was on that years RAC rally where it finished 17th overall. The second car to use this number was the RHD versuion, built for Tony Pond when he returned to BL in 1980.This was Tony Ponds favourite car, not only did it win two rallies on tarmac but was also very quick in the forests, this is why he used it in the 1980 RAC.Ran with Pierburg fuel injection on one rally in 1980 In its final rally it was fitted with the JJO 931W plate to make it look newer and the TUD 683T plate was fitted to a recce car.

17 XJO 414V The first car to bear this number was LHD and used by Per Eklund to replace TUD 682T in the second half of 1979 including the RAC rally where he finished 13th overall. The second version of XJO 414V was the new RHD car built for Roger Clark and Jim Porter to use as part of the works team but painted in the colours of his main sponsor, Sparkrite. Roger joined the BL team after Ford withdrew from rallying at the end of 1979, it also coincided with his family business being given the BL franchise for Leicester. Roger Clarks  best result was ninth overall in the Scottish rally

18. HRW 250V New car built for Tony Pond to use in 1980, its best result was fourth overall on the Scottish rally with Fred Gallagher, it was always RHD and finished 1980 by winning the Eaton Yale rally sprint, now in Unipart colours and until recently kept at Gaydon with SJW 540S.After being sold to Unipart 250V was used to contest the 1983 Air India rally of the Himalayas, driven by Ian Young, the car was going well in third place before a broken halfshaft caused its retirement.

19. HRW 251V The 6th LHD car built and also the last new car built (and actually used)by the factory, driven by Per Eklund, Timo Makinen and John Buffum during 1980. Its only succes in that year was Eklunds second place in the Daily Mirror Rallysprint. Used by John Buffum in the 1980 Lombard RAC, fitted with Pierburg fuel in jection, also used in the 1981 event but re painted  in the silver colours of Leycare and returned to quad Webers. This car was always LHD when used by the factory.

20. JJO 931W This number was only used once by the factory, it was put on Tony Ponds car for the 1980 RAC rally, the last appearance for the works TRs. Its a well known story that the number was taken from a development TR8 and put on Tonys favourite car TUD 683T after John Davenport had seen four brand new Escorts in the Ford works team. The car finished 7th overall after dropping  down 100 places due to an accident with one of the lions feeding tables at Longleat. This is the most successful of the factory TR7s, it won two rallies in 1980 as well as being the highest placed TR on the RAC. In 1998 JJO won the Coys Rallysprint in the hands of Tony Pond, his time for the course was only 2 seconds slower than the latest works Escort Cosworth WRC. It is difficult to find an original picture of JJO without damage because Tony Pond ran into a lions feed table at Longleat on the very first stage of its only rally, the 1980 RAC.